Don’t have a Kindle? No problem… get the free Kindle reading app and read on any smart phone, tablet or computer.

A jilted teacher, a charming Irishman, & the chance to escape their pasts & start again

“One of the very best Christian love stories I have ever read.”

Book 1: Lingering Shadows
To her family's consternation, Lizzy deals with heartache by running away with Daniel, a near-stranger. But once they're married, Lizzy discovers her new husband has demons he hasn't shared with her–and the stresses of marriage will send him back to them. Can these two lost souls endure the greatest challenge of their lives?

Book 2: Facing the Shadows
Daniel is locked in a downward spiral, unable to break free of his demons. Though her heart aches for him, Lizzy realizes she must protect herself and their unborn child. She must also face her own past before she turns toward the future. When Daniel is badly injured by his own folly, can this couple who've been divided by pain, embrace God's healing touch on them both?

Book 3: Beyond the Shadows
Lizzy and Daniel settle into their new life in the Lake District. As Daniel grows in his faith, they look forward to parenthood. But when Daniel receives devastating news of family tragedy, his sobriety is threatened. As he and Lizzy travel to Ireland to reunite with his estranged family, can Daniel draw on God's strength and Lizzy's support to remain a steadfast man of faith?

Book 4: Secrets and Sacrifice
When Grace O’Connor arrives in the Scottish Highlands, she’s hiding a secret and trailing more baggage than she cares to admit. Grace’s sister, Brianna, has a history linked to Grace’s secret. There, amongst the rugged Scottish Highlands and a community of caring, loving Christians, Grace meets the handsome Ryan MacGregor, an ex-military Paratrooper with a history of his own.

Book 5: A Highland Christmas
Brianna O’Connor is looking forward to spending Christmas in Spain with her friend, Susan. Instead, she finds herself in her sister’s car heading for the Scottish Highlands to spend it with family she barely knows.  Andrew McKinnon is coming to the Highlands to share Christmas, and a secret that is about to change his life forever, with his parents. Surrounded by family thrust together by Brianna’s well-meaning brother, Daniel, Brianna and Andrew are attracted to each other, something Brianna never expected would happen. Bruised and damaged as a teenager, can she now trust God to overcome her distrust of men and open her heart to this softly spoken handsome Scotsman? Don't miss this Christian romance saga of love tested by the haunting bonds of the past—get your copy of The Shadows Series Box Set (Books 1-5) today!

“I thoroughly enjoyed reading this series and had a hard time putting it down.” Lloyswife

I absolutely LOVE this series. I grew to connect with each of the characters with each passing page. If you are looking for a story with real-life situations & great character development, with the love of God interwoven throughout the pages, I HIGHLY recommend The Shadows Series by Juliette Duncan! 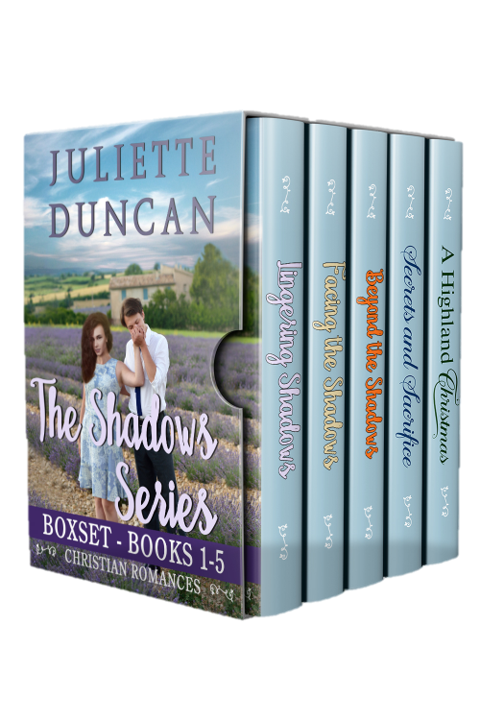